☡
A tiny piece of writing was included in Software for Artists Book: #001: Building Better Realities, edited by Willa Köerner, published by Pioneer Works Press with The Creative Independent and Are.na, 2020. The writing was originally posted on are.na as a digital diary submission, and the piece was selected for the book, which is now available for download and in print.

☡
Wendy’s Subway invited me to give a talk as part of “Artist-publishers, care, and social action” on July 30, 2020, on the occasion of their online residency with Libby Leshgold Gallery and READ Books at Emily Carr University of Art + Design in Vancouver, Canada. Also presenting was Beatrix Pang, founder of Small Tune Press and co-founder of Hong-Kong-based collective ZINE COOP.
[Read: “Urgentcraft (July 30, 2020)”]

☡
I was interviewed by Elise By Olsen for her contribution to the online Russian Federation Pavilion for the Venice Architecture Biennale, launched July 15, 2020. (PDF)

☡
“On the power of mutual aid publishing during crisis—Artist and educator Paul Soulellis on creating urgent artifacts, radical DIY publishing, and a call to document this moment.” in The Creative Independent, June 4, 2020.

☡
A new talk that I gave at Otis College: Urgentcraft (April 27, 2020). I spoke about mutual aid publishing during crisis, urgent artifacts, and how art and design can loosen power. This is a revision to my Urgentcraft text from last summer (given at the Eyeo Festival and The Conference in Malmö), updated in response to COVID-19 and incorporating Queer.Archive.Work and Urgency Reader 2. I shared the URL with viewers as I presented, which turned out to be a very good way to do a talk on Zoom, using the visuals on the web page to present but giving the audience the ability to follow links and spend time with resources during the talk and afterwards.

☡
With less than 24 hours remaining in 2019, I’m reflecting on the work I’ve produced in the last decade. And trying to gather together the writing that’s mattered to me the most. Writing where I attempted to work something out in public. This isn’t everything that I’ve written, but in hindsight, these are the 20 texts that mark significant pivots in my thinking/making over the better part of a decade. They trace my wanderings here and there, and inform who I am in 2020 as an educator and an artist. I’m excited to do more.

1—“Design Humility,” for The Manual, my first commissioned piece of writing (2012). Cringe-worthy now, but it was an important start for me.
2—“*Resistance* Scenes from a designer’s counter-practice” for the Build design conference in Belfast, Ireland, my first public talk (2013).
3—“The Generosity Echo,” commissioned by Wendy Richmond for Communication Arts. I had just completed Weymouths and needed to write about the experience (2013).
4—“Search, compile, publish: towards a new artist’s web-to-print practice,” first delivered as a talk at The Book Affair, in Venice, Italy, and later printed as an edition of 500 newsprint zines and distributed freely at the NY Art Book Fair, to introduce Library of the Printed Web. Published in 2019 by MIT Press in Publishing Manifestos (2013).
5—“Performing Publishing: Infrathin Tales from the Printed Web,” a text I wrote for Hyperallergic for the launch of Printed Web #2. I was at NEW INC and had just started teaching at RISD, and this piece would form the basis for Experimental Publishing Studio a few months later (2014).
6—“Digital Publishing, Unzipped,” my first commissioned piece for Rhizome, written while I was in residence at NEW INC, at The New Museum (2015).
7—“The Download: sorry to dump on you like this.zip,” written to accompany the first of seven Download commissions that I curated for Rhizome, by Christopher Clary. A “must-read art essay,” according to artnet (2015).
8—“The Distributed Monument,” written to accompany Morehshin Allahyari’s Download commission, and later published in Allahyari’s 3D Additivist Cookbook and Rhizome’s Net Art Anthology (2016).
9—“Carrying, embeddedness, printedness. Window-into-the-page. A grand assembling.” A talk performed at Printed Matter (2016) for the launch of 3D Additivist Cookbook.
10—“Occupying Plöger’s Library,” commissioned for Wolfgang Plöger: Inherited Lies at Konrad Fischer Galerie, Dusseldorf, Germany 20 January–18 March 2017 (2017).
11—“Notes on Feeds,” which evolved into “Performing the Feed,” a talk delivered at the Cybernetics Conference (2017).
12—“Urgent Archives,” commissioned by Charlotte Cotton for Public, Private, Secret: On Photography and the Configuration of Self, co-published by Aperture and the International Center of Photography (2017).
13—“Sanctuary,” included in Safe, a pavillion curated by Christopher Clary for The Wrong Digital Art Biennial (2018).
14—My Design Insights talk at the Walker Art Center (2018).
15—“Publishing as practice as resistance,” a talk delivered at a number of venues (2018).
16—“Queer.Archive.Work #2, 1923 Internet Archive Edition,” written while in residence at the Internet Archive and published on their blog (2019).
17—“The Post As Medium,” a long-form essay commissioned for Rhizome’s The Art Happens Here: Net Art Anthology, edited by Michael Connor and Aria Dean [full text will be posted here soon] (2019).
18—“At Home in the Archive,” for Queering the Collection, published by GenderFail and ICP (2019).
19—“Feed Time,” for Time Forward!, a catalogue that accompanied the exhibition of the same name, at V-A-C in Venice, Italy [full text will be posted here soon] (2019).
20—“Urgentcraft,” a talk written for the Eyeo Festival, also delivered at The Conference in Malmö, Sweden, and self-published/distributed at the NY Art Book Fair (2019).

☡
Document Journal invited me to write a short piece about my memory of December 31, 1999.

☡
I was invited to write a brief text for “Nothing’s Lost In Numbers” (2019), a work by Felix Gärtner and Romano Dudas, installed at Galerie Kernweine in Stuttgart, Germany (August 8–October 6, 2019). My piece was included in the installation as an email printout, pinned to the wall with the photographic works. The images were found on 31 used memory cards purchased by the artists on eBay and displayed without any permission or identification of the original authors.

Who profits here? All signs point to artists Felix and Romano and the gallery that hosts this project. Financial, intellectual, and artistic capital will be generated by this exhibition, if all goes well. Meanwhile, what has been lost? The people who created these images and unknowingly supplied them to the artists go uncompensated and uninformed. The artists’ promise to “reveal things that were not originally intended for the viewer’s eyes” does exactly that, exposing the act of grabbing property to claim as one’s own as a classic colonialist gesture, disguised here as artistic practice. The unacknowledged collaborators may never know how their work has been used, but does it matter? The artists’ deletion of authorship, attribution, and agency remains on view in this gallery, fully exposed as an enormous debt. “Nothing’s Lost in Numbers” claims to question whether the act of deleting has any meaning in the digital realm, but goes far beyond this simple inquiry. The project replicates the loss of privacy it claims to critique, asking us instead to examine the ethics of an art world that engages in practices of neglect, invisible labor, and erasure.

☡
“Urgentcraft”—a talk delivered at the eyeo festival on June 6, 2019 (video). A shorter version of Urgentcraft was presented at The Conference in Malmö, Sweden in August 2019 (video). Distributed 350 copies as a self-published zine at the NY Art Book Fair in September 2019 (PDF).

☡
“At Home in the Archive” has been published in QUEERING THE COLLECTION, (Be Oakley, Christopher Clary, Patricia Silva, Emily Dunne, editors) GenderFail / International Center of Photography, March 2019 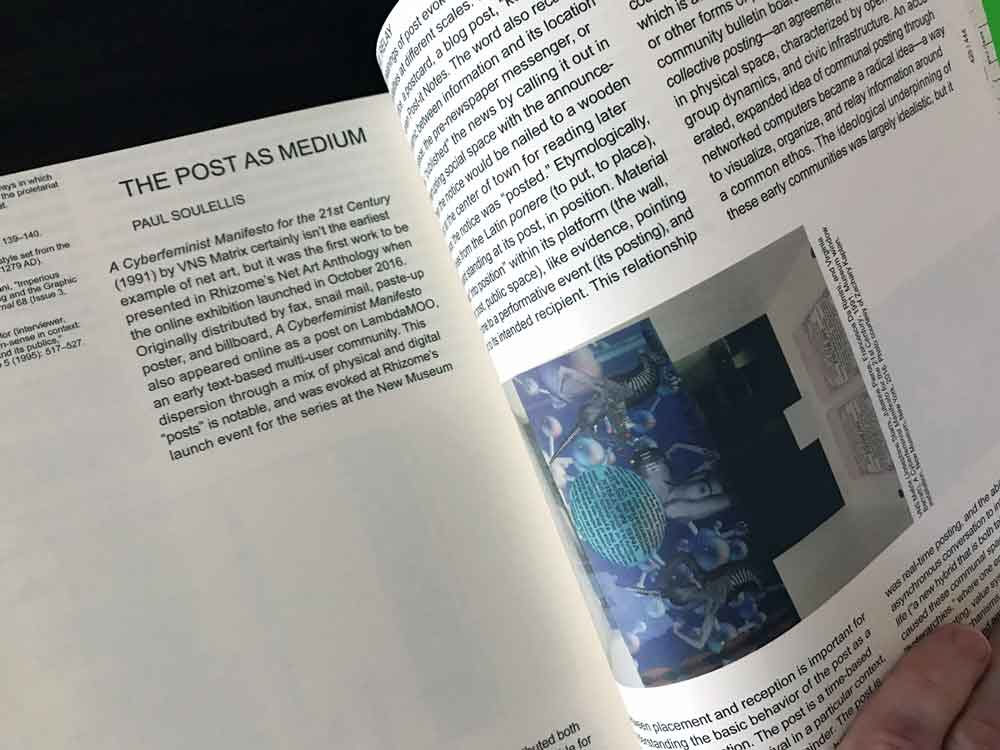 ☡
“The Post As Medium” has been published in The Art Happens Here: Net Art Anthology, Rhizome / New Museum, April 2019

☡
“Urgent Archives,” essay published in Public, Private, Secret: On Photography and the Configuration of the Self, Charlotte Cotton, ed., co-published by Aperture and ICP, 2018. Also appears in Library of the Printed Web: Collected Works, 2013–2017, published by Paul Soulellis, 2017.

☡
“Search, Compile, Publish.” Originally delivered as a talk at The Book Affair, Venice, Italy, May 2013. Self-published as a newsprint broadsheet, edition of 500, distributed for free at the NY Art Book Fair, September 2013. 2016 update delivered as a talk at Miss Read, Berlin, June 2016. Included in Publishing Manifestos, edited by Michalis Pichler, May 2018, and published by MIT Press, March 2019.

☡
“Muddy Waters” appears in a special broadsheet on the occasion of Nicholas O’Brien’s Treatment, the Plan for Rain at Knockdown Center, NYC, May 8–July 1, 2018.

☡
“Rozendaal: The Path to Abstraction,” text accompanying the presentation of into time.com as part of Net Art Anthology, Rhizome, Dec. 2017.

☡
“Performing the Feed,” a talk delivered at The Cybernetics Conference, NYC, November 2017. Published by Rhizome in its Seven on Seven 10th Anniversary Magazine What’s To Be Done?, May 2018.

☡
“Merging with the Network,” interview with Eva and Franco Mattes accompanying the presentation of Life Sharing as part of Net Art Anthology, Rhizome, Oct. 2017.


“An improvisation,” an 8-page work for White Zinfadel magazine, with the John Cage Trust, May 2017.

☡
“Library of the Printed Web: The Guy Who Makes Art Out of the Internet,” Vice Magazine, The Future of Tech Issue, Feb. 2017.

☡
“A BOOK IS THE BOOK: A READING IN 142 PARTS,” talk performed at Printed Matter for the launch of Code X (Danny Aldred and Emmanuelle Waekerle, eds.), Nov. 2015.

☡
From way back in 2013: a talk I wrote for the Build Conference in Belfast, Ireland. “Resistance: scenes from a designer’s counter-practice.”